Abu Huraira reported: The Messenger of Allah, peace and blessings be upon him, said, “The Hour will not be established until the Euphrates river uncovers a mountain of gold and people will fight over it. Every ninety-nine people out of a hundred will be killed and each man among them will say: Perhaps I will be the one who is saved!”

Grade: Sahih (authentic) according to Muslim

The Birth, Death and Age of some Major Scholars of Islam 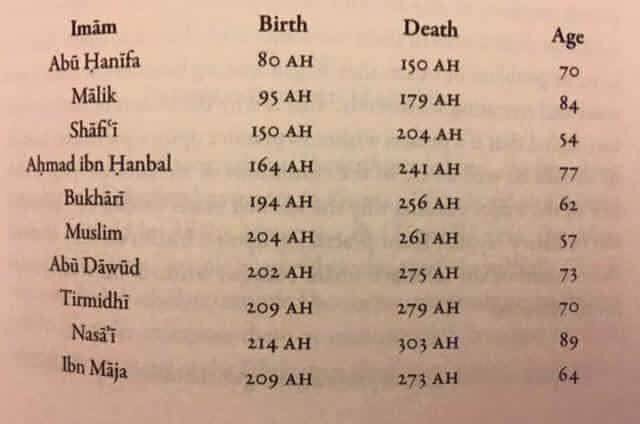 The importance of knowing the dates of birth/death of the scholars cannot be stressed enough, for it holds a high status in Islāmic knowledge in general and in the

science of Hadīth in particular. Thus, Imām ‘Alī ibn al-Madīnī mentions, “Comprehension of the meaning of Hadīth is half of knowledge and knowing the transmitters is the other half.” To illustrate this point, let us look at the following incident:

A group of Jews presented a letter from the Messenger of Allāh that supposedly absolves the inhabitants of Khaybar from paying jizyah. This letter contained the testimony of the Companions and had the signature of ‘Alī (Allāh be pleased with him). When it was brought to the head of state, he gave it to al-Khatīb al-Baghdādī to examine it. After examining it, al-Khatīb concluded that the letter was forged. When asked how he came to that conclusion, he replied, “It contains the testimony of Mu‘āwiyah (Allāh be pleased with him) who only accepted Islām during the conquest of Makkah whereas Khaybar was conquered on the seventh year of Hijrah. Further, it contains the testimony of Sa‘d ibn Mu‘ādh (Allāh be pleased with him) who passed away during the battle of Banū Qurayżah, which was two years prior to the conquest of Khaybar.”

In view of this importance, we prepared the following chart, which contains the names, dates of birth/death, and works of prominent hadith scholars, starting from the second century AH until the present century. In this chart, we have sufficed on the relatively prominent hadith scholars; as otherwise, there would be no end to the list. Wherever possible, both the dates of birth and death were mentioned. Otherwise, only the date of death was mentioned, preceded by the abbreviation, “d.” When an approximate date is mentioned, it is preceded by “c.” (circa). The abbreviation “p.” means “post.”

It should be noted that the purpose of this chart is to serve as an easy reference for those searching for the names and dates of birth/death of major hadith scholars. Those who are interested in detailed biographical entries of these scholars should refer to the relevant works, such as Wafayāt al-A‘yān of Ibn Khallikān, Siyar A‘lām al-Nubalā’ of al-Dhahabī, Tabaqāt al-Shāfi‘iyyah al-Kubrā of Tāj al-Dīn al-Subkī, Shadharāt al-Dhahab of Ibn al-‘Imād, and al-A‘lām of al-Ziriklī etc.. To facilitate easy referencing, relevant works for further details have been cited under each entry in the Arabic chart.

END_OF_DOCUMENT_TOKEN_TO_BE_REPLACED

The Isnād System: An Unbroken Link to The Prophet

via The Isnād System: An Unbroken Link to The Prophet

Pause for a moment, and ask yourself: what are the greatest accomplishments of the Muslim civilization? At first thought, a number of things will probably come to mind, ranging from mathematics to medicine to architecture—perhaps even coffee.[1] But unfortunately we tend to overlook one of the greatest accomplishments, if not the greatest: the isnād system. That a person, till this day, can attribute a hadīth to the Prophet and then follow it with a list of authorities reaching back successively to the source is what scholars as early as Abū Bakr al-Thaqafī (d. 309 AH)[2] described as an exclusive accomplishment of the Muslim civilization.[3]

END_OF_DOCUMENT_TOKEN_TO_BE_REPLACED

The Preservation of the Ḥadīth Literature

via The Passing of Shaykh Muhammad Mustafa al ‘Azami

The Prophet (ﷺ) fasted for days continuously; the people also did the same but it was difficult for them. So, the Prophet (ﷺ) forbade them (to fast continuously for more than one day). They slid, “But you fast without break (no food was taken in the evening or in the morning).” The Prophet (ﷺ) replied, “I am not like you, for I am provided with food and drink (by Allah).

Day 42 of Embryo – Miracle of Islam

Evil one is he who is evil in the womb of his mother and the good one is he who takes a lesson from the (fate of) others. The narrator came to a person from amongst the Companions of Allah’s Messenger (ﷺ) who was called Hudhaifa b. Usaid Ghifari and said: How can a person be an evil one without (committing an evil) deed? Thereupon the person said to him: You are surprised at this, whereas I have heard Allah’s Messenger (ﷺ) as saying: When forty-two nights pass after the semen gets into the womb, Allah sends the angel and gives him shape. Then he creates his sense of hearing, sense of sight, his skin, his flesh, his bones, and then says: My Lord, would he be male or female? And your Lord decides as He desires and the angel then puts down that also and then says: My Lord, what about his age? And your Lord decides as He likes it and the angel puts it down. Then he says: My Lord, what about his livelihood? And then the Lord decides as He likes and the angel writes it down, and then the angel gets out with his scroll of destiny in his hand and nothing is added to it and nothing is subtracted from it.

END_OF_DOCUMENT_TOKEN_TO_BE_REPLACED

Notes from “On Schacht’s Origins of Muhammadan Jurisprudence by M. M. A’zami”

In any evaluation of the isnad system one must keep firmly in mind its
centra! position in Islam. The belief that the ahadith handed down by the
Prophet have the force of law is largely based on Qur’anic injunctions.
These ahadith came to us from the Prophet through chains of transmit-
ters. They are, thus, the cornerstone of the Islamic faith and the code of
ethics associated with it. Sufyan al-Thauri (d. 161 AH.) says: “The isnad is
the believer’s weapon; thus, when he has no weapon, with what will he
fight? 1 Another scholar, Ibn Mubarak (d 181 AH), says: “Isnad is a part
of religion (din), and if there were no isnad everyone would be free to
report what he wants.” 2

END_OF_DOCUMENT_TOKEN_TO_BE_REPLACED

360 joints in Body (Miracle of Islam)

‘A’isha reported Allah’s Messenger (ﷺ) as saying:
Every one of the children of Adam has been created with three hundred and sixty joints; so he who declares the Glory of Allah, praises Allah, declares Allah to be One, Glorifies Allah, and seeks forgiveness from Allah, and removes stone, or thorn, or bone from people’s path, and enjoins what is good and forbids from evil, to the number of those three hundred and sixty joints, will walk that day having saved himself from the Fire.
Abu Taubah said: “Perhaps he said: ‘Will reach the evening.'”

Compare this hadith to what current science has determined about joints: