Only 1% of Greek Manuscripts contain the whole New Testament

Apology
In my debate with Bart, I mentioned that I had it on good authority that this was definitely a first-century fragment of Mark. A representative for who I understood was the owner of FCM urged me to make the announcement at the debate, which they realized would make this go viral. However, the information I received and was assured to have been vetted was incorrect. It was my fault for being naïve enough to trust that the data I got was unquestionable, as it was presented to me. So, I must first apologize to Bart Ehrman, and to everyone else, for giving misleading information about this discovery. While I am sorry for publicly announcing inaccurate facts, at no time in the public statements (either in the debate or on my blogsite) did I knowingly do this. But I should have been more careful about trusting any sources without my personal verification, a lesson I have since learned.

This really puts his so-called scholarship into question.

Apostolic Writings are a ‘MODERN FABRICATION’

The collection, as we have seen, is a modern fabrication. Some of the books were clearly not written near the time of, let alone by companions of, the apostles (e.g., 2 Clement and the Epistle to Diognetus), whereas other books that are not included in the collection probably do go back to at least the first part of the second century (e.g., the Gospels of Thomas and Peter, which have never been included in the corpus).

END_OF_DOCUMENT_TOKEN_TO_BE_REPLACED

Was Jesus killed BEFORE or AFTER the Passover meal? (New Testament Contradiction)

April 14, 2018 8:19 pm / 3 Comments on Was Jesus killed BEFORE or AFTER the Passover meal? (New Testament Contradiction)

Taken from Bart Ehrman’s THE NEW TESTAMENT: A HISTORICAL INTRODUCTION
TO THE EARLY CHRISTIAN WRITINGS, page 47-48:

END_OF_DOCUMENT_TOKEN_TO_BE_REPLACED

Gospel of Luke according to Luke, not an Eye-Witness Account

END_OF_DOCUMENT_TOKEN_TO_BE_REPLACED

Christianity is MORE than the Teachings of Jesus ! 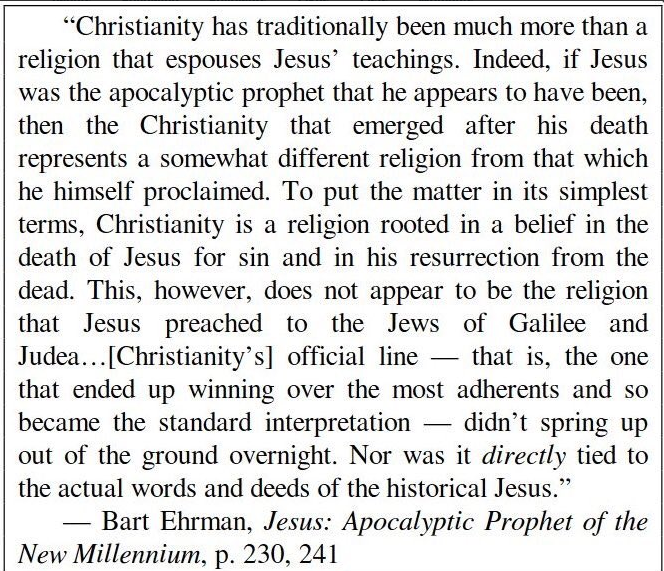 Often Christians use Josephus and Tacitus to show the ‘historical’ validity of the Crucifixion. However,  hypocritically they would deny their historical accounts when they differ with their New Testament history.

In Bart Ehrman’s  New Testament textbook, he mentions the following:

“Contrary to what Luke indicates, historians have long known from several ancient inscriptions, the Roman historian Tacitus, and the Jewish historian Josephus that Quirinius was not the governor of Syria until 6 C.E., fully ten years after Herod the Great died. If Jesus was born during the reign of Herod, then Quirinius was not the Syrian governor.”

Shhhh…..First Century Mark is not Authentic